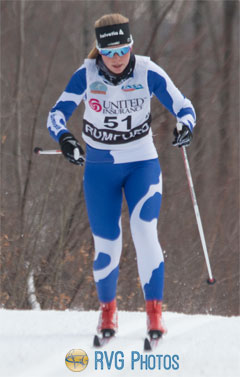 Classical and a field of 152 skiers and scorched the course, crossing the finish line in :14:25.7 to win the gold medal at Black Mountain of Maine on January 27th. Laukli's time was nearly one minute faster than the next competitor. Taking the silver was Olivia Skillings of Maine Coast Waldorf Academy with a time of :15:25.0. Winning the bronze was Jenny Wilbraham of Morse HS in Bath with a time of :15:58.4. The race on the John Roderick Trail System was the first using the Chisholm Ski Club's new track setter. It was the third race of the day, with the Jr. Sassi 3K taking place earlier in the morning, and the tracks set up well and lasted through the last racer of the day. 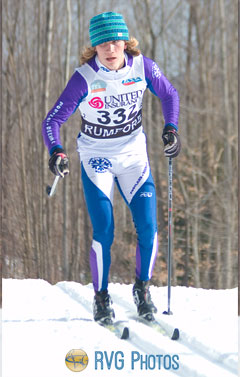 In team scoring, the Yarmouth women's team finshed first with 60 points, followed closely by Maine Coast Waldorf in second with 62 points and Gould Academy with 71 points. Rounding out the top 6 were Maranacook (93), Freeport (107), and Mt. Blue (110).