EHSC & U16 Qualifiers Close Out Nordic Competition at Black

Black Mountain's 2018-19 Nordic Race Season came to a close Saturday, March 2nd with the Eastern High School and U16 Championship Maine team qualifying races. Skier's were competing with the hope representing Maine in the New England Nordic Ski Association's U16 Eastern Championships in Bethel from March 8-10 and the EHS Championships at Fort Kent from March 15-17. 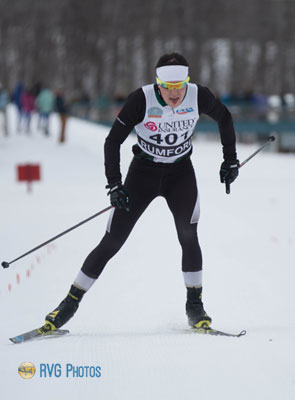 Second place was a dead heat, with Falmouth HS freshman Nate Livingood and Maranacook's Carter McPhedran both finishing in 14:01.9. The next thee finishers were Gabe Fein of Maranacook, Ethan Livingood of Falmouth, and Samuel Smith of Mt. Blue.

Nate Livingood's time was the top U16 finish. Leif Harvey of Greely was second in 14:36.9. Third place went to Caden Cote of Central Maine Ski Club, who finished in 14:53.2. Rounding out the top 6 were iguel Sanclemente of Fort Kent, Utah Bena of Gould Academy, and Ben Horrisberger skiing for Portland Nordic.

In the women's 5k classical, it was Mt. Blue freshman Emma Charles grabbing first place overall, completing the course in 15:24.8. Isabelle Jandreau of Madawaska came second with a time of 16:17.1. Lily Horne of Freeport was third, finishing in 16:23.1. Rounding out the top six were Jennifer Wilbraham, skiing for Manfield Ski Club in Vermont, Eva Clement of Falmouth, and Zoe Maguire of Fryeburg Academy. 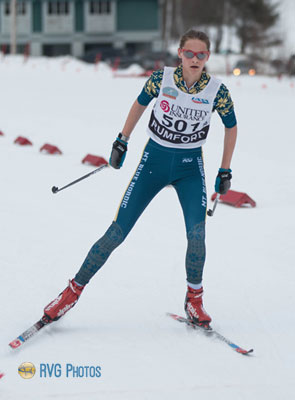 Charles time was tops in the U16 division, with Eva Clement of Falmouth coming in second with a time of 16:28.3. Portland Nordic's Clarke Aoonte crossed the finish line in 17:15.2 to take third place. Jaidyn Negley of Leavitt, Madeline Marston of Yarmouth, and Greely's Alex Collins also finished in the top six.

In the afternoon, skiers changed skis and poles for the 5k Freestyle Pursuit race. The men began the afternoon chasing Roy Varney, the morning's classical winner. Varney's lead held up and he crossed the finish line first, completing the course in 12:49.1 for a two-race total of 26:23.1. Ethan Livingood gained ground on Varney with the fastest freestyle time of 12:44.5, but it was not enough to catch the Hornet skier. Carter McPhedran was the third high school skier to cross the line.

Nate Livingood was the first U16 skier to cross the line, completing the 5k in 13:27.2. Greely's Leif Harvey had the fastest U16 Freestyle time of 13:26.3, but Livingood's held his lead. Third place went to Miguel Samclemente.

In the women's high school race, Charles went out first with a 53 second head start and extended her lead, finishing the 5062m course in14:30.9 for a two-run time of 29:54.9. Isabelle Jandreau of Madawaska was second, with Mansfield's Wilbraham of Bath coming in third.

The 24 member teams will now go on to compete against teams from New England and New York.

Race photos for the day's event are available at