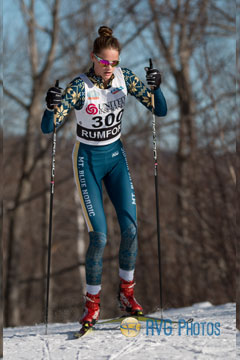 Nordic 5k Freestyle Championship at Black Mountain on February 5th. Charles, who swept the league competition last year as a freshman, completed the solid course in 13:29.2. Behind her was teammate Brynn Roberts, finishing in 14:25.1. Mt. Blue's Kamryn Joyce finished in third with a time of 14:54.6 to complete the podium sweep for the Cougars. Other strong finishers were Jaidyn Negley of the Leavitt Hornets, Bridget Reusch of Mt. Blue, and Maranacook's Maura Taylor. 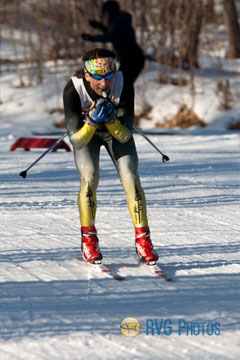 In the last race of the day, the boy's 5k Freestyle mass start was won by Carter McPhedran of Maranacook, who skated across the finish line in 12:18.8. Harrison Bigos-Lowe of Edward Little High School came in second with a time of 12:47.8. The final podium position was captured by Evan Hornback of Mt. Blue, who had a finish of 12:58.6. Day 2 of the KVAC Championships are scheduled for Saturday, February 8th at Titcomb Mountain in Farmington. This will be a 5k classical pursuit race.