Ruck and Hemingway Skate to Victory 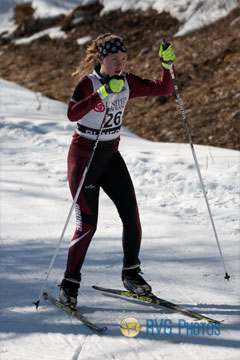 Mountain Valley Conference Freestyle Championship at Black Mountain of Maine on February 5th, completing the 5k course in 17:10.8. The Red Riots are an associate member of the MVC during the ski season. Sam Allen of Winthrop was second to cross the finish line with a time of 17:29.6. Third place went to Mt. Abram's Emily Kidd, finishing in 17:45.7. Completing the top six finishers were Ruck's teamate Megan Gerbi, Winthrop's Maya Deming, and Mila Long-Frost of Mt. Abram HS. 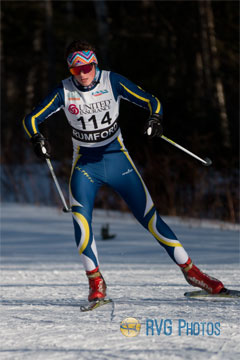 In the MVC boys 5k freestyle, First to skate across the finish was Alex Hemingway of Mt. Abram, who completed the fast course in 13:14.2, the become the 2020 MVC Freestyle Champion.  His winning time was 13:14.2.  His teammate Cam Walters took second place, finishing in 13:52.9. Spruce Mountain's Abrahm Geisinger was third, crossing the line in 13:59.1.

Originally scheduled as a classical mass start race, the technique was changed to a skate race due to the fact that the course, which had adequate cover, was too hard to set a track. Championships continue on Saturday, February 8th at Titcomb Mountain in Farmington with the 5k Classical Pursuit.